The differences between a junior, mid-level, and senior developer

The years of experience of a programmer are not the only indicator for ranking a junior, mid-level, or senior programmer. This does not mean that a senior programmer has to be a master in all areas of software development, but it is quite accurate to claim that an advanced programmer is much more skilled than a junior or mid-level programmer.

What are those skills that separate each category between programmers? Let’s find out. 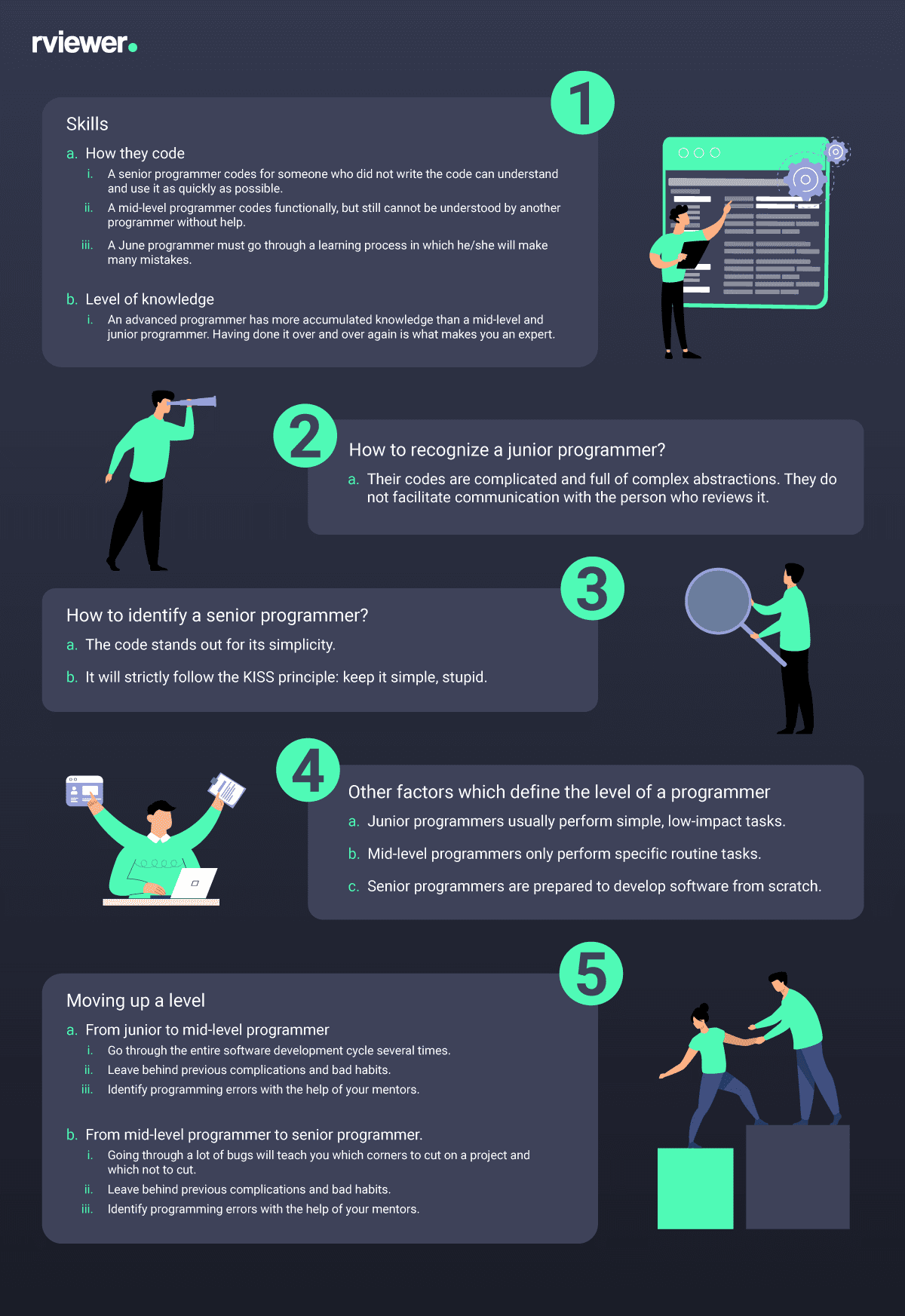 If you think that programming code is only communicating in a way that the computer understands you, you are wrong. The true beauty of coding is that you can communicate with people and interact with computers, because in the end all the code is going to be compiled into zeros and ones.

The code has to make sense to other programmers who will work with it in the future. A senior programmer will code in a way that someone who didn’t write it can understand it and use it as quickly as possible. This way, he can add other functions or correct errors without wasting too much time.

Coding like a senior programmer is something that can only be achieved with experience, since a mid-level programmer must have gone through a full-cycle software development at least once or twice. So not only has hehad to go through the code of senior programmers for later use, but he also had to make his own code readable for junior programmers to use.

Because of this, it is very likely that they have made many mistakes, but they have also gained experience from them and learned to code in the appropriate way.

Certify your coding skills through real-world tech challenges and get detailed feedback from senior engineers. With your skills validated you will be able to apply for our top job offers. 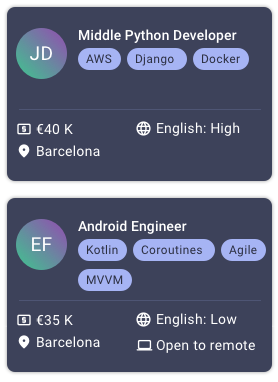 TRY IT FOR FREE

As it is easy to deduce, an advanced programmer has more accumulated knowledge than a mid-level and a junior. Therefore, the junior programmer must study in depth pattern design, architecture, automated testing, operation, security etcetera to reduce the gap with respect to the mid-level and senior programmer.

It should be noted that, although it is important to know how things should be done throughout the software development cycle, this does not make you a senior programmer. Know-how is a factor, but the fact of having done it over and over again is what makes you an expert.

How to recognize a junior programmer at first glance?

Junior programmers are inexperienced, usually recent graduates starting their first full-time job. They are usually focused on getting the code to work. As long as it does, for them there is no difference between functional software and good software.

Programming directly and understandably is difficult, and it’s something newbies don’t do. As a rule their codes are complicated and full of complex abstractions.

This is their way of demonstrating to their elders that they are good at programming, when in reality they are proving the opposite. Junior programmers focus on the side of the code that goes to the computer instead of facilitating communication with the human who checks it, and this is wrong.

How to identify a senior programmer?

When reviewing the code of a senior programmer, it surprises for its simplicity. You may even wonder if that is all and they are not hiding part of the code, because the expert writes in the simplest, most direct and sometimes even dumb way, so it is easily understood what each line does and why.

In short, a senior programmer will strictly follow the KISS principle: Keep it simple, stupid.

The fundamental difference with the junior programmer is the point of view that the senior programmer uses when writing his code. He will always think of his work in terms that make it scalable and easy to maintain; ihe focuses more on the people who will work with his code later than the coding itself.

Their coding skills may seem simplistic, but that’s the beauty of well-made software.

Other factors that define the level of a programmer

In addition to the skills in writing program code, there are other factors that allow programmers to be classified.

Junior programmers typically do simple, low-impact tasks on overall project progress, and do no design the software architecture.

Nor will mid-level programmersdesign solutions: they only perform specific routine tasks. The difference is that the latter do not require as much supervision as long as the tasks assigned to them are relatively known.

Senior programmers are prepared to develop software independently, from scratch. This does not mean that they do not have to consult on some aspects or ask for help from others: developing a project is having doubts about it every day and this is a reality that will never change.

Thus, the senior programmer is never totally lost on the path to follow and knows how to implement each answer to his questions. They can and should consult with other developers who have more experience in a specific area, but go straight to the solution without wasting time on unnecessary explanations, because they already have deep enough knowledge.

In contrast, a junior programmer should not be expected to ask the right questions to get out of a tight spot in his coding. Since they have not faced any objective problems and are inexperienced in code handling, it is necessary to provide them with the guide of more experienced programmers to give them a push in the right direction.

Moving to the top level

So what steps are necessary to progress in the programming world? Let’s see:

From Junior to Mid-level programmer

Newbies have no programming experience, so the least they can do is go through the entire software development cycle a few times. During this transit they will make many mistakes and fall into countless traps, but they will also learn the tricks of how to get out of trouble in the hands of his mentors.

As for the way they write the code, they will have to leave behind the previous complications and bad habits This is achieved by reviewing the way of coding of the senior programmers, who always think about the next person who will look at their way of programming. By imitation, the junior will acquire the habit of keeping things simple.

Newbies must also learn to identify their programming errors, and gain a better understanding of how each process works within the company. In the same way, they must acquire knowledge on topics such as architecture, performance, security and others to go to the next level.

From Mid-level developer to Senior programmer

This jump is already a little more difficult . Many mid-level programmers remain in that category throughout their career, as advanced programmers only reach that level going through many mistakes: which of them teach which corners to cut from a project and which not to.

To reach a senior level, the programmer must be willing to take on tasks that no one knows how to solve and go further. He also has to be able to transmit his knowledge to lower-level programmers, and act as a safety net to get the most inexperienced out of trouble without affecting the project progress.

Last but not least, senior programmers are gurus in their specialties and often consulted by other specialists who are at the same level. This requires mastering all the tools and applications that are used within the company, and therefore becoming fundamental gears in the development of their companies.

Years of experience do not separate programmers into classes. Of course, it is true to say that as a programmer works more on their skills and knowledge, they achieve greater prestige, but senior programmers separate themselves from the rest in the way they see and write code.

They also know what questions to ask and how to react to each answer, which can only be done by a programmer with a lot of experience and who knows in detail each tool at his disposal.

View All
For Devs, Product Releases

Building a strong software developer profile that makes an impact

Introduction to the Public Profile: create your portfolio to share

Subscribe to our newsletter to keep up with the latest trends!